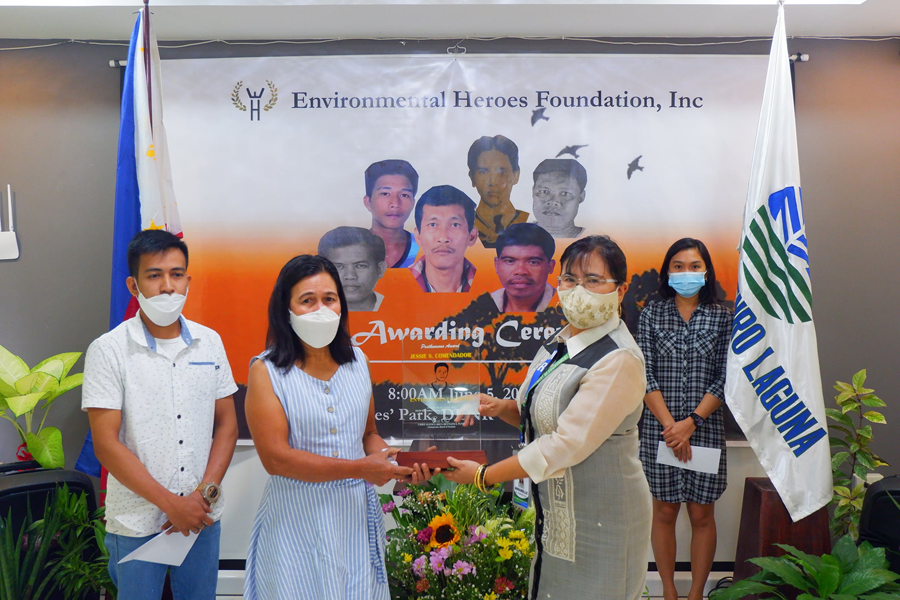 In conjunction with the celebration of World Environment Day which is celebrated annually on June 5, 2021, the Environmental Heroes Foundation Inc. (EHFI) together with the PENR Offices of Laguna, Kalinga, Bukidnon and Surigao Del Sur held an awarding ceremony in commemoration and recognition of DENR’s Environmental Heroes or employees who have lost their lives in line of duty. The said ceremony was conducted simultaneously in the DENR Central Office (face-to-face) and the concerned field offices via videoconferencing (virtual). The trophy of recognition was awarded to the families of the environmental heroes by the PENRO, representing the EHFI, due to the constraints brought about by the COVID-19 pandemic.

The ceremony commenced with a welcoming remark from Assistant Secretary Daniel Darius M. Nicer – Executive Director of EHFI followed by an inspirational message from DENR Secretary Roy A. Cimatu who was represented and whose speech was delivered by Undersecretary Benito T. De Leon – Enforcement, DENR. ASEC Nicer also introduced the foundation which is a non-stock, non-profit organization that recognizes brave individuals that risked their lives in protecting our environment. After which, each families of the environmental heroes received a trophy of recognition and an initial cash prize in recognition of their heroic acts. Six outstanding individuals from the provinces of Laguna, Kalinga, Bukidnon and Surigao Del Sur were awarded and recognized. The program ended with a closing remark from Former Chief Justice, Reynato S. Puno, who is also the Chairman of the Board of Trustees – EHFI.

Jessie S. Comendador, a native from Pila, Laguna who was then a contractual-laborer is the environmental hero of PENRO LAGUNA.

On July 15, 2013, PENRO Laguna and CENRO Los Banos personnel conducted anti-illegal logging operations in Kalayaan, Laguna. The team was composed of Forest Rangers and some laborers who were contracted to haul confiscated forest products. Illegal lumber and flitches with an aggregate volume of more or less 700 board feet and 11 carabaos with an estimated value of Php. 300,000.00 were confiscated. A case was filed at the Provincial Prosecutor’s Office against 8 individuals. As the team were heading to So. Lamao Brgy. San Antonio, Kalayaan on board of a pick-up vehicle,  an unidentified person ambushed and fired upon them. Three Forest Rangers were wounded, and Jessie who was then only 19 years old did not survive this encounter.

In behalf of PENRO Ronilo L. Salac, OIC-Chief, Annabelle M. Barquilla (Management and Services Division), awarded the trophy of recognition to Mrs. Faith S. Comendador (mother of Jessie) and Mr. Christian S. Comendador (brother). Mr. Christian Comendador also thanked the EHFI and the DENR for his brother’s recognition and the assistance provided by the foundation to their family.