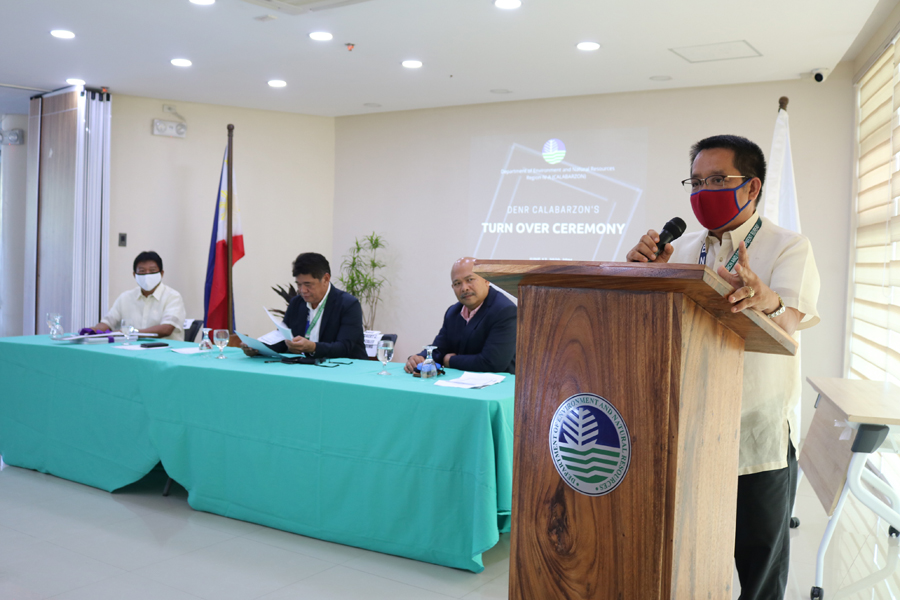 Calamba City -- The role of the Department of Environment and Natural Resources (DENR) is crucial to be able to maintain the balance between economic development and environmental sustainability, the new DENR CALABARZON Regional Executive Director Nonito M. Tamayo said as he laid down his management priorities during the ceremony on the turnover of leadership in the DENR Regional Office on June 17, 2020.

“If you would notice in the priority programs of our Secretary namely, renewable solid waste management, you have NGP (National Greening Program) the community program, forest protection, biodiversity conservation, responsible mining—these are all means parallel to economic development and environmental sustainability”, Tamayo added.

He said it is a challenge for the department to sustain balance between the two aspects considering the present situation. “It will be very hard, and I cannot do it alone. With your cooperation and support, kaya natin ‘yan,” he addressed his new subordinates.

The new Regional Executive Director also said that he will focus on matters pertaining to the citizens’ awareness on issues relating to the conservation of the environment and natural resources within the region.

“We are very fortunate that we have with us Director Nonie. RED Nonie is one of the top caliber REDs… I’m sure he will become a good asset for DENR CALABARZON,” Gonzales said on Tamayo.

“I’m very thankful to the management for giving me again a field operation position. And, I think, more than that, they gave me a region that is closest to my heart,” said Tamayo, who was born and raised in Santo Tomas, Batangas.

Prior to assuming his new post as the RED of DENR CALABARZON, Tamayo spent five months as the Director, Ecosystems Research and Development Bureau. He was the RED of DENR CARAGA from 2013-2017 before becoming the Director, Forest Management Bureau in 2017-2019. He is a Registered Forester and a Career Executive Service Officer IV who has been serving the public through the DENR for 34 years.

The novice director said he never expected that he would get such a high position.

Palencia said that he will apply in his new office the management style which he acquired when he became a Community Environment and Natural Resources Officer (CENRO) and then a PENRO in the past two decades.

Palencia was designated as the OIC, ARD for Technical Services of the DENR CALABARZON by virtue of the DENR Special Order No. 2020-193 signed by Environment Secretary Roy A. Cimatu on June 5, 2020. He succeeded Director Arturo E. Fadriquela, who is already assigned to the DENR Central Luzon as its ARD for Management Services.

“Sigurado naman tayo (na) we’re leaving the office of ARD for Technical into good hands. I have high respect for PENRO Fred, and I know that he will succeed in this new assignment,” Fadriquela said.

Palencia is a Registered Forester who has been working at the DENR for 41 years.

CENRO Ramil R. Limpiada of Tayabas, Quezon succeeded Palencia as the OIC, PENRO of Quezon as per DENR Special Order No.2020-190 dated June 5, 2020. The said issuance also hailed CENRO Noel M. Recillo as the OIC, PENRO of Batangas and CENRO Raymond A. Rivera as the CENRO of Tayabas, Quezon. The former PENRO of Batangas, Jose Elmer Bascos, is already designated as the OIC, ARD for Technical Services of DENR Region VIII through DENR Special Order No. 2020-193 dated June 5, 2020.

The ceremony on the turnover of leadership in PENRO Batangas was held last June 15, 2020. On the other hand, the joint turnover ceremony for PENRO Quezon and CENRO Tayabas, Quezon will be held on June 19, 2020 at 2 pm.###