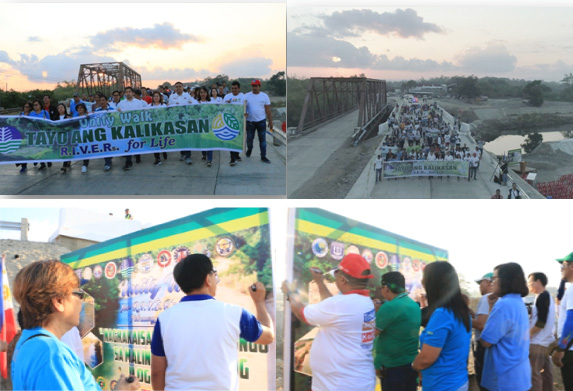 ALAMINOS City, Pangasinan – IlogAlaminos, the river system which discharges its water low into the famous Hundred Islands, has been adjudged as the official entry of DENR-Region 1 (Ilocos Region) in the R.I.V.E.Rs for Life Award of the Department of Environment and Natural Resources.

R.I.V.E.Rs stands for Recognizing Individuals/Institutions towards Vibrant and Enhanced Rivers to raise awareness on the need to protect and conserve rivers as the lifeblood of the earth and human civilization.

Launched in 2017, the award intends to recognize individuals and institutions for their initiatives and concerted efforts to protect the country’s rivers from degradation and pollution, and to improve their designated use and classification by implementing appropriate mitigation and intervention measures.

On Tuesday (March 5), the Regional Evaluation Committee headed by DENR Regional Executive Director Carlito M. Tuballa declared IlogAlaminos as the region’s entry in the national level of the award.

IlogAlaminos is a Class “C” river with 35-kilometer length and traverses 29 barangays of Alaminos City. Being a Class “C” river, its water is intended only for agriculture, irrigation and livestock watering, and drains its water into the Lingayen Gulf where the renowned Hundred Islands are sporadically formed.

Tuballa said the selection of IlogAlaminos as regional winner and entry in the national level was sparked by the Unity Walk spearheaded by CENRO Western Pangasinan held last February 25.

“The Unity Walk for IlogAlaminos has raised awareness of the importance of the riveron the fast growing local economy,” said Tuballa, adding that the participation of individuals coming from different sectors indicates their willingness to become part in the rehabilitation, restoration and conservation of the river.

Based on the water sampling done in November last year, the coliform level of the water of IlogAlaminos was 2800 most probable number (mpn) per 100 milliliters (ml). The standard coliform level for a Class“C” river is 200 mpn/100 ml, pursuant to DENR Administrative Order No. 2016-08.

Tuballa said that appropriate mitigations and interventions shall be done to reduce the river’s coliform level to the standard, and to improve the quality of its water for recreational purposes.

National winners of the R.I.V.E.Rs for Life Award will be announced on June 10, 2019 in time with the anniversary of the DENR. ###