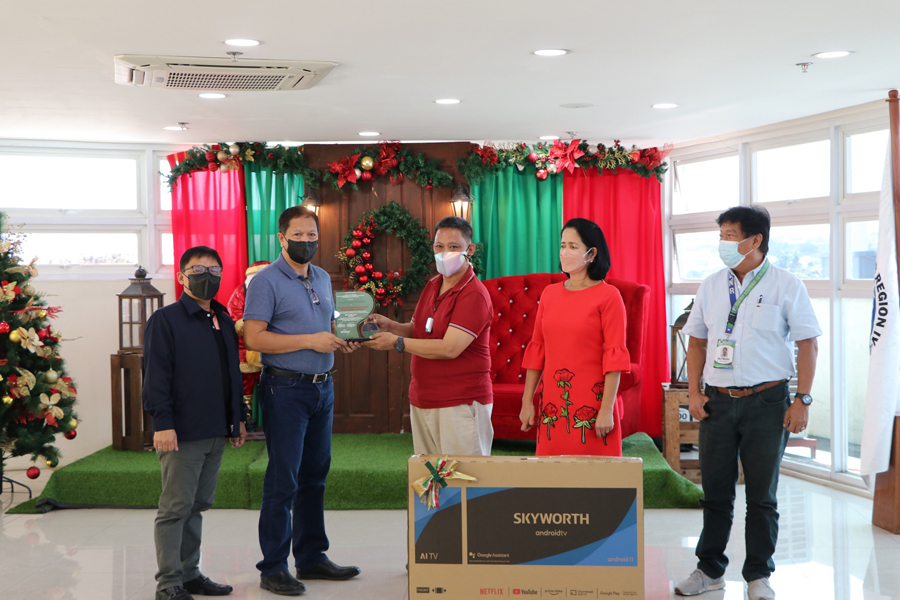 The DENR-CALABARZON Regional Office recognized and awarded its top Provincial and Community Environment and Natural Resources Offices (PENRO and CENRO) for accomplishing their 2021 goals and targets that contributed to the achievement of the DENR’s mandate and programs in the Region. The awarding ceremony took place during the Year-End Assessment, Service Award, and Recognition Program for CY 2021 of the Department of Environment and Natural Resources (DENR) CALABARZON on December 21, 2021. Through the efforts of the Program on Awards and Incentives for Service Excellence (PRAISE) Committee of DENR CALABARZON, the recognition is in pursuance of the Office’s continuing thrust and commitment to service excellence, to which DENR Batangas successfully responded to the call for innovativeness, efficiency, and integrity in frontline service.

During the culmination program, DENR CALABARZON Regional Executive Director Nilo B. Tamoria awarded the Best PENRO to PENRO Batangas and the Best CENRO to CENRO Lipa City. RED Tamoria commended the awardees, with challenge to continue to give their best not only in accomplishing their targets but most of all, to practice efficiency and decency in implementing the programs and projects of the DENR. All of the provincial and field offices were also recognized and applauded during the program and were challenged to be steadfast in their commitment to render efficient and proactive service to the public.

Another award was given to CENRO Lipa City in recognition of its efficiency to raise revenue collections, which resulted in the highest revenue generated for CY 2021.  Cartographer I/DPLI Myla A. Melo, also of CENRO Lipa was awarded a plaque of recognition for achieving the highest number of Residential Free Patents processed/issued for CY 2021. DPLI Melo also received a certificate of recognition for achieving the second highest number of Agricultural Free Patents processed/issued for the same year.

OIC-PENR Officer Noel M. Recillo acknowledged the contributions of the entire workforce of DENR Batangas as he praised the relentless efforts of PENRO Batangas personnel and the staff from the field offices of CENROs Calaca and Lipa City. OIC-CENR Officer Allan Willard M. Estillore of Lipa City expressed appreciation of the spirited team-work displayed by CENRO Lipa personnel in accomplishing all its mandates and activites for the year and specially acknowledged the contributions of his predecessor, formerly OIC-CENRO Januel Peras (now OIC-PENRO of Cavite), to the overall achievements of CENRO Lipa, and of DENR-Batangas as a whole.

Be informed further that all precautionary measures and safety protocols against COVID-19 threat were properly observed and enforced during the activity.