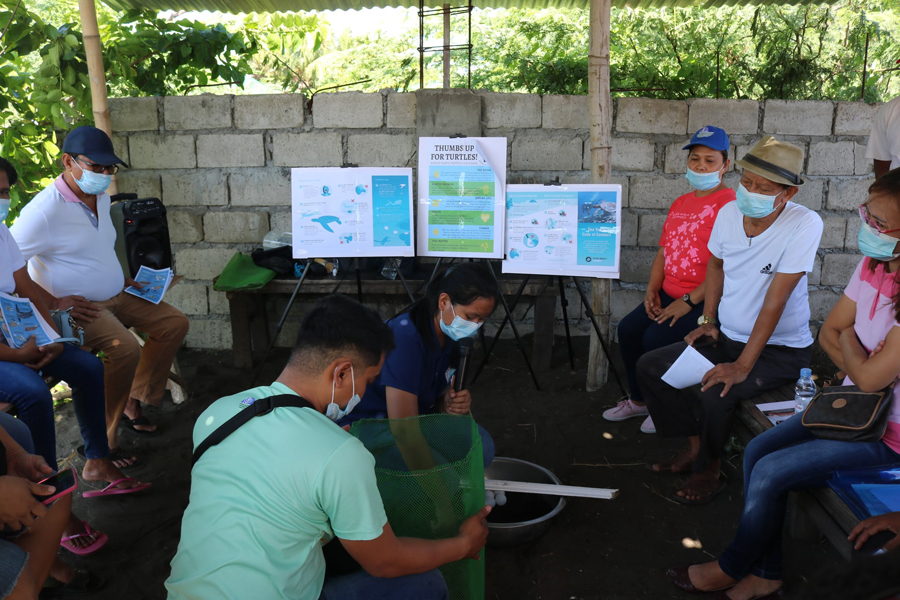 World Sea Turtle Day is celebrated every 16th of June each year to highlight the importance of protecting and conserving the sea turtles or marine turtles.  The Philippines is home to 5 of the 7 sea turtle species in the world wherein 4 are classified as Endangered (Green Turtle, Loggerhead Turtle, Leatherback Turtle and Olive Ridley) and 1 is Critically Endangered (Hawksbill Turtle) as listed on the IUCN Red List.

Sea turtles have been around the earth for 110 million years and have outlived their ancestral dinosaurs and they can live up to 50 to 100 years. However, ocean pollution, turtle egg poaching, hunting for turtle meat are some of the challenges that these majestic and docile creatures face in their lifetime.

This year, the DENR CENRO Calaca through their Conservation and Development Section headed by For. Elizabeth Galit conducted an IEC lecture on the importance of the marine turtle conservation including actual demonstration on how to properly handle marine turtle eggs until they hatched into saplings for proper release to the Oce9an.

The activity was done in Brgy Mataas na Bayan, Lemery, Batangas where there are sightings of marine turtle nesting. It was participated by the Pawikan Response Team composed of four Brgys. of Lemery namely: Wawa Ilaya, Wawa Ibaba, Sambal Ibaba, Sambal Ilaya and residents of Brgy Mataas na Bayan, Lemery, headed by Brgy.Captain Ronaldo Ovrador. Continuous intensive Information Education & Communication (IEC) campaign on Marine Turtle could help save these creatures from near extinction.

Marine turtles are protected by Republic Act 9147 or the Wildlife Resources Conservation and Protection Act of 2001. It is prohibited to hunt, kill, or possess this wildlife or destroy their habitat. If caught or apprehended, the violators will be subject to the penal provisions as stipulated in the law. ###