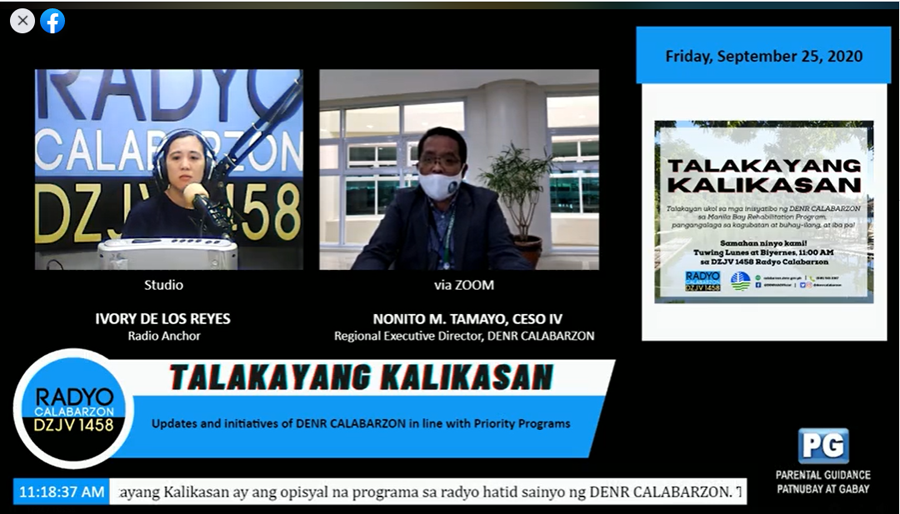 As a kickoff, DENR Calabarzon Regional Executive Director Nonito M. Tamayo served as the special guest, tackling the initiatives of the regional department in relation to the ten priority programs of the DENR.

Tamayo said one of the initiatives of the agency under the Enhanced Biodiversity Conservation Program was the conduct of Asian Waterbird Census from January 7-24, 2020 which recorded a total of 13,742 migratory birds including threatened species such as Philippine Duck, Black-belled Tern and White-shouldered Ibis. He also mentioned that they conducted a mangrove assessment in Noveleta, Cavite for the planned establishment of science-based mangrove site in partnership with the Forest Foundation Philippines and the Zoological Society of London, and reviewed the draft five-year work plans of eight People’s Organizations under the Community-based Forest Management.

With regard to the efforts of the regional department under the Intensified Forest Protection and Anti-Illegal Logging Program, Tamayo said the office through its Enforcement Division and its counterpart units at the field offices strictly monitor the operation of lumber dealer and wood processors, closely coordinate with the law enforcement agencies, deputizes volunteers as Environment and Natural Resources Officers, conduct close monitoring of illegal environmental activities in forest areas through the LAWIN System, and immediately respond to the threats observed on field and to the citizen reports on environmental violations via the 8888 hotline.

In terms of improving land administration and management, Tamayo said the regional department already started implementing the Rapid Land Tenure Appraisal in Santo Tomas, Batangas and Magallanes, Cavite to hasten land titling under the DENR in the said areas. He also mentioned that, in view of the COVID-19 pandemic, the office through the Surveys and Mapping Division released an online request form for those who wish to get copies of land records. He further updated that the regional office will soon launch a web-based system to facilitate online requests for permits, among others.

Tamayo further updated that they entered into an agreement with 11 Mineral Production Sharing Agreement (MPSA) holders and two Peoples Organizations for the “Offset Bamboo Plantation Program” within the Upper Marikina River Basin Protected Landscape in Antipolo City, in celebration of the World Bamboo Day last September 18, 2020 and as a way to uphold responsible mining.

In response to the Covid-19 situation, Tamayo said the DENR Calabarzon initiated a Compassion Project as per Bayanihan Act of 2020, wherein, the donations collected from the officials and staff are used to procure personal protective equipment, hygiene and sanitation items, and food packs to be distributed to some hospitals and frontliners in the region. He also mentioned that the DENR Quezon launched a Gulayan Project Challenge to promote backyard and office vegetable gardening and that, the Gender and Development focal point of the regional department introduced a “Heavy Weight Loss Challenge” to encourage their personnel to have healthy minds, bodies and lifestyle amidst the threats brought about by the pandemic.

With respect to the implementation of the Manila Bay Rehabilitation Program, Tamayo said they are making sure that the cleanup activities along the rivers leading to Manila Bay are regularly conducted despite the pandemic. He said they hired a limited number of River Rangers to ensure social distancing. He added that the office continuously provides them with complete PPE, alcohol, and vitamins to protect them from Covid-19 and the possible infections the activity may bring to them.

“(By) October this year, we are looking forward to officially launching the Calabarzon Sanitasyon at Basura Watch or the CASABWATCH program which focuses on strict implementation of the anti-littering and anti-illegal dumping ordinances”, Tamayo said. The said project is a joint initiative of the regional department and the Department of the Interior and Local Government (DILG) Calabarzon to make sure the citizens within the region no longer litter and dump their wastes into the rivers.

Tamayo also updated that for the year 2021, they are looking into the installation of Biogas digester technology in Cavite to reduce pollution load from livestock and poultry industries, and to lessen the wastewater draining to the tributaries of Manila Bay. He added that they will establish additional trash traps along the rivers across the region. He said they envision barangays in different cities and municipalities building their own eco-gardens to reduce wastes entering sanitary landfills, rivers, and waterways.

Towards the end of the radio program, Tamayo encouraged the listeners to take part in the programs and activities of the DENR such as tree planting activities. He also encouraged them to practice proper waste segregation and disposal, composting of biodegradable wastes and gardening especially during the time of pandemic, and to refrain from doing illegal environmental activities.

The radio program “Talakayang Kalikasan” airs every Friday and Monday at 11:00 AM-12:00 NN via the DZJV 1458 Radyo Calabarzon and is livestreamed on the Facebook page of the said radio station. Its second episode on September 28, 2020 will tackle Clean Air, Clean Water, Solid Waste Management, and Scaling Up of Coastal Marine Ecosystem.###