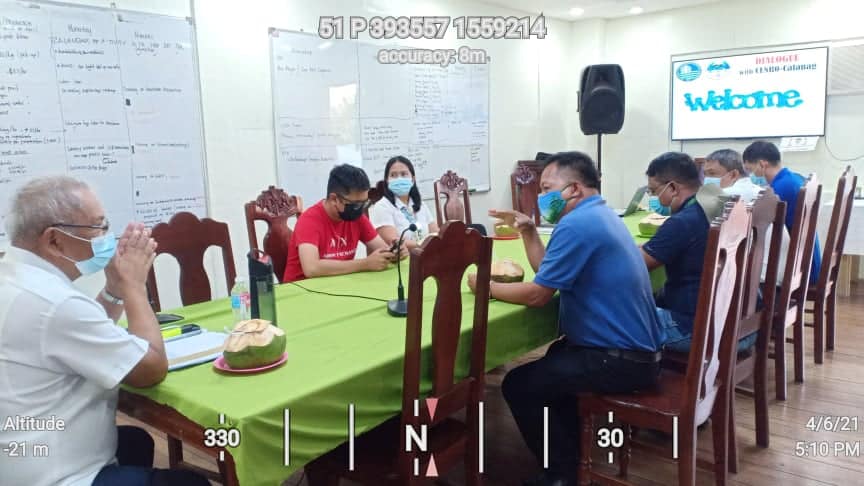 Coursing the municipalities of Alabat, Perez, and Quezon unveils a seemingly elongated borough in Quezon Province, CALABARZON—that is, the Alabat Island.

For the CENRO Calauag personnel and officials headed by CENR Officer Joselito D. Barros, travelling the waters of Lamon Bay last April 6-8 was a good opportunity to engage in and conduct various activities related to the conservation and protection of forests and other ecosystems in Alabat Island.

During the visit, Perez Municipal Mayor Pepito C. Reyes showcased some of the forthcoming and ongoing projects in the locality. Said undertakings prioritize the engagement of people to create jobs for the community.

Later, Mayor Reyes escorted CENRO Barros and his team to some of the rarely seen natural features of Perez. Included here are the protuberating caves and alluring scene of beaches located in Brgy. Pambuhan—which depict the town's impressive tourist attraction potentials waiting to be unleashed.

The group moved afterwards to the ongoing construction of circumferential road, intended not only for the seaside community struggling to have accessible road, but also for the tourists to have a comfy travel to the beaches of Perez, Quezon.

Before nightfall at around 5:00 PM, CENRO Calauag proceeded in resolving land issues and concerns through a dialogue meeting with Alabat LGU, presided by Mayor Fernando L. Mesa.

The meeting surfaced the updates on “Handog Titulo Program” pertaining to the status of 27 submitted applications; copy of MOPA signed on February 2020; extension of free patent; and continuation of the aforesaid program. Also raised in the discussion was the Alabat-Quezon Boundary Dispute and other important matters.

The following day, Alabat MENRO Remelyn Oliveros disclosed to CENRO Calauag the status of the informal settlers residing near the shores of Brgy. Poblacion 3. Said area have been identified as salvage zone of the barangay.

MENRO Oliveros explicated that as per letter of request sent by Mayor Mesa to the Mines and Geosciences Bureau (MGB) CALABARZON last February 26, 2021, they asked technical assistance on the assessment of the status and suitability of the proposed resettlement site for the occupants.

To aid the request of Mayor Mesa, the CENRO Calauag Team led by CENR Officer Barros with the technical assistance of the Regulatory and Permitting Section (RPS) Chief, Engr. Randy P. Anacta and his colleagues, immersed in the site to conduct ocular inspection during the day.

The last day, April 8 was lined up in promoting the significance of mangroves in the community. Relatively, an Information, Education, and Communication (IEC) Campaign was spearheaded by CENRO Calauag at the Brgy. Hall of Angeles through the Coastal and Marine Ecosystems and Management Program (CMEMP) of DENR.

Various topics discussed were the CY 2020 Annual Accomplishment Report of CMEMP and its upcoming activities for CY 2021, as tackled by CMEMP Assistant Focal Person, FT I Hector S. Dañez.

The benefits of and threats on mangroves, together with the existing laws in the conservation and protection of mangroves was explained by Monitoring and Enforcement Section Chief and AWFR PASu, Forester II Romel David Rama.

The event ensued to a mangrove planting activity, and a total of 250 propagules of mangroves were planted by 30 participants from the Blue Brigade, PNP Alabat, Alabat LGU, and CENRO Calauag along the shoreline of Brgy. Angeles.

Back on the second day of CENRO Calauag’s visit in Alabat Island, CENR Officer Joselito D. Barros instructed all his Section Chiefs to present the targets and activities under their sections for information of Quezon Municipal Mayor Ma. Caridad P. Clacio.

Various concerns of Mayor Clacio regarding DENR matters arising in their community were answered by the section chiefs. Specifically, issues on permitting and free patents were the major concern during the meeting.

SWEET-EnMO Alvin Magtaas provided an update regarding open dumpsites subjected for closure per instruction of DENR Sec. Roy A. Cimatu.

MENRO Raywuel Escolano said that they already identified 2-hectare area of potential Sanitary Landfill in Brgy. Villa Mercedes. On which, he added that their Office currently secures the requirements for the acquisition of Environmental Compliance Certificate (ECC) prior to construction.

Municipal Engineer and MPDC Dexter O. Oliveros raised some of the emerging issues in land titling/survey. In which, he requested assistance from CENRO Calauag in surveying the areas near the salvage zone in coastal portion of Brgy. 5.

CENRO Joselito D. Barros introduced a plan in organizing a Survey Team to be led by RPS Chief, Engr. Randy Anacta. Likewise, Engr. Hazel Grace Aumentado emphasized that the LGU should provide a letter to be endorsed by CENRO Calauag to the Regional Office indicating their request for verification survey.

He added that Alabat LGU and CENRO Calauag should undertake Memorandum of Partnership Agreement (MOPA) that will aid in resolving the existing problems in processing of land titles.

During the productive 3-day visit of CENRO Calauag, CENR Officer Barros opened to the 3 Municipalities of Alabat Island his plan of having a municipal coordinator in each municipality. This is to give every municipality the assistance they need regarding DENR matters and equip them on the existing knowledge and laws in conservation of protection of our environment and natural resources.