DENR CALABARZON Regional Executive Director Ipat Luna has announced that confiscated forest products that are currently in the custody of the office, will be disposed by way of donations to public infrastructures. She highlighted the Executive Order No. 23, series of 2011, Section 2.7,  states that “the Department of Education shall be given priority in the use of all confiscated logs.”

Meanwhile, under Memorandum Order 284, other institutions may also request for donations, and the prioritization shall be in the following order:

Forest products, equipment, and conveyance that will not be a disposed through donation will be up for public bidding. Only the DENR Regional Committee on Bids and Awards, headed by the Regional Executive Director, are authorized for the disposition. All proceeds from the sale of these products will revert to the General Fund. (DAO 97-32).

Apprehended forest products[1] including equipment, tools, and conveyances will go under Administrative Confiscation Proceedings (ACP) headed by the respective Community Environmental and Natural Resources Offices. Confiscation is the official act of the DENR declaring that items become property of the Government of the Republic of the Philippines.” (DAO-97-32)

All persons involved in apprehensions will be facing criminal complaints. Transporting any form of forest products, as well as the conveyance and equipment involved, is a violation of Section 77 of PD 705 as amended by RA 7161 (renumbered) and implemented under DAO No. 32, Series of 1997.

DENR CALABARZON is urging the public to report Environment and Natural Resources-related, especially illegal logging operation cases via hotline 8888,  sms to +639456215007/ +639083340224, email to This email address is being protected from spambots. You need JavaScript enabled to view it. or send us photos, videos and other information via https://www.facebook.com/DENR4AOfficial/ #DENRCalabarzon #TayoAngKalikasan

CENRO Pagbilao, contributed almost half of the confiscated major forest products, with 49,681.93 board feet. CENRO Real, on the other hand, has the lead on confiscated charcoal, with 93 sacks, and equipment with 15 units.

In pursuant to Executive Order No. 23, which declares a moratorium on the cutting and harvesting of timber in the natural and residual forest and creating an Anti Illegal Logging Task Force (AILTF), a Memorandum of Agreement (MOA) was generated to create an AILTF for the Province of Quezon, which has the most number of apprehension.

The Chairperson, will be responsible in developing the strategic and operational planning for the implementation of the forest campaign and protection for the Quezon Province. All the parties involved showed their full support and commitment.

DENR is still urging the public to report ENR related cases via hotline 8888 or social media. For citizens who would like to report illegal logging operations, you may send a message to +639456215007/ +639083340224, email to This email address is being protected from spambots. You need JavaScript enabled to view it. or send us photos, videos and other information via https://www.facebook.com/DENR4AOfficial/ #DENRCalabarzon #TayoAngKalikasan #InternationalDayOfForests2019

Scientists Support the Closed Season for Tawilis from March to April 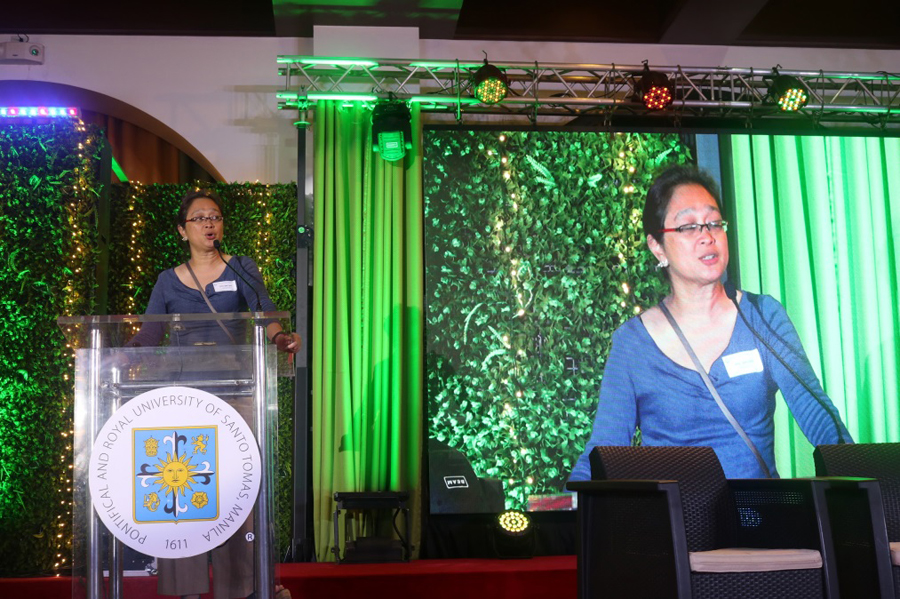 The Tawilis Summit 2019 with the theme: “4TS: Talakayan Tungkol sa Tawilis at Taal” was held on February 19, 2019 at the University of Sto. Tomas, España, Manila. The whole day event targeted to inform the public about the rationale and other related researches about the Sardinella Tawilis and Taal Lake. The summit provided the venue for stakeholders to discuss the current status and future management prescriptions to conserve the Tawilis population. Tawilis is the only freshwater sardine and can only be found in Taal Lake.

According to a study of Reproductive Biology of the Tawilis done by Associate Professor Alicia Pagulayan, “Sardinella Tawilis breeds the whole year round with peak spawning activities from December to March and a less pronounced spawning during the months of July to October”.

A study about the Tawilis fishery reserves and spawning grounds were discussed by Dr. Ma. Theresa Mutia. Both studies done by Prof. Pagulayan and Dr. Mutia showed the same results on the most active spawning months, which is March to April.

Dr. Mudjekeewis Santos, explained the assessment of the International Union for Conservation of Nature (IUCN) of the Tawilis as an endangered species. Dr. Santos disclosed that the goal of the IUCN is to “provide knowledge and tools that enable human progress, economic development and nature conservation to take place together.” One tool that the IUCN provides is the Red List of Threatened Species. The goal of the Red List is “to provide information and analyses on the status, trends and threats to species in order to inform and catalyze action for biodiversity conservation”.

Santos also said that as early as 2011, there is already a paper published depicting the depletion of the Tawilis. He said that every time an animal goes endangered, “we did not do enough and we are failing”.

On the other hand, the home of the Tawilis, Taal Lake, was discussed by Dr. Rey Donne Papa. He said that it is a tropical caldera lake, with an active Volcano and has intensive Aquaculture with very little scientific data. Dr. Papa also said that the changes and improvements in Taxonomy of the lake, the introduced and invasive species, the impact of Aquaculture and climate change makes the Taal Lake worthy to be studied again and again.

Atty. Maria Paz Luna, Regional Executive Director of Department of Natural Resources, shared that the Taal Volcano Protected Landscape (TVPL) Management Plan has undergone public consultations, a task force has been created, a revised plan has been drafted and has an active Protected Area Management Board (PAMB). Despite these, there are challenges due to increasing population and the absence of sewerage and septage systems in the Municipalities and Cities surrounding it. To add to that, there are illegal discharges of livestock farms that drain to the lake. She continued on discussing the penalties and fines under the Expanded National Integrated Protected Areas System (E-NIPAS) Act which may be served to violators. RED Luna highlighted that if the PAMB so decides, their decision has to be followed.

Tawilis harvested by fisherfolk for subsistence is allowed

(Her full speech may be accessed here: https://www.facebook.com/PhilippineSymposiumonFreshwater/videos/2350556145173561/ )

Dr. Francis Magbanua, President of the Philippine Society for Freshwater Science (PSFS) stated their support regarding the declaration of the Tawilis as an endangered species. In summary, the society supports the ordinance issued by the Protected Area Management Board (PAMB) to implement the closed season of Taal Lake during March to April, including the implementation of a proper mesh size and establishment of sanctuaries.

Dr. Magbanua also emphasized the need for enforcement in the area. He reminded that not only it is a job for the DENR and Bureau of Fisheries and Aquatic Resources (BFAR), but also for the Local Government Units and other stakeholders. He also called for the need for continuous monitoring of the Tawilis and the lake to see if the implementation is successful.

The Tawilis Closed Season will be implemented from March to April this year and the years after. The DENR is urging the public to report establishments who will be selling Tawilis during the closed season.  Other ENR-related cases may be reported via sms to +639456215007/ +639083340224, email This email address is being protected from spambots. You need JavaScript enabled to view it. or send us photos, videos and other information via https://www.facebook.com/DENR4AOfficial/ #DENRCalabarzon #TayoAngKalikasan 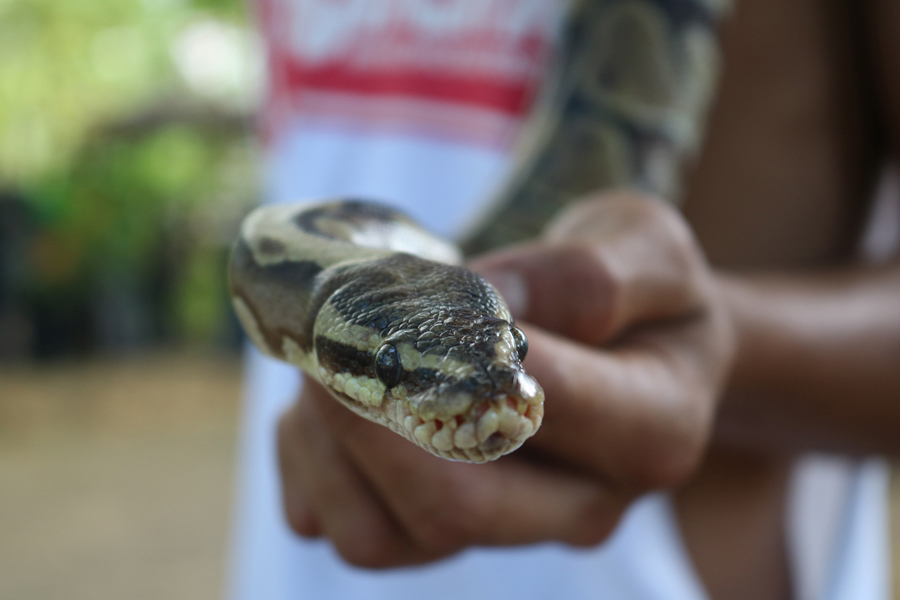 Ecosystems Management Specialist II, For. Ingrid De Leon, discussed the participation of the Internet in wildlife trading. As defined by RA 9147, Wildlife trading is an “act of engaging in the exchange, exportation and importation, purchase or sale of wildlife, their derivatives or by-products, locally or internationally”.

The use of internet created a new media for traders for easier and faster transactions. For. De Leon mentioned that the Internet created a “hybrid market that combines the traditional and economic opportunity structures with the new ones provided by the Internet. It has boosted the wildlife trading in a substantial way by lowering the barriers to entry into criminal markets and opening the way for new criminal actors”.

On the other hand, Dr. Glenn Maguad, OIC, Wildlife Rescue Center, showed and discussed the proper handling of wildlife. He discussed the basic equipment and basic restraints that can be used when encountered with wildlife. He stated that the government should invest in basic equipment for handling wildlife, such as gloves, catching nets, katsa, and hooks. He also reminded that always be careful in handling and capturing wildlife.

Dr. Maguad also addressed the Media to stop putting more stress to the animals during rescues. He said that always refrain from using flash during photo documentations.

Maguad also reminded the attendees to always gather the data needed, such as location of the wildlife, its cleanliness, the length of time in captivity, food given, and the origin, if possible, as it will affect the handling and the care for the animal.

Activities such as a mock case scenario for wildlife investigation and an actual handling of wildlife were conducted to properly educate and prepare the attendees for future reports related to wildlife. ### 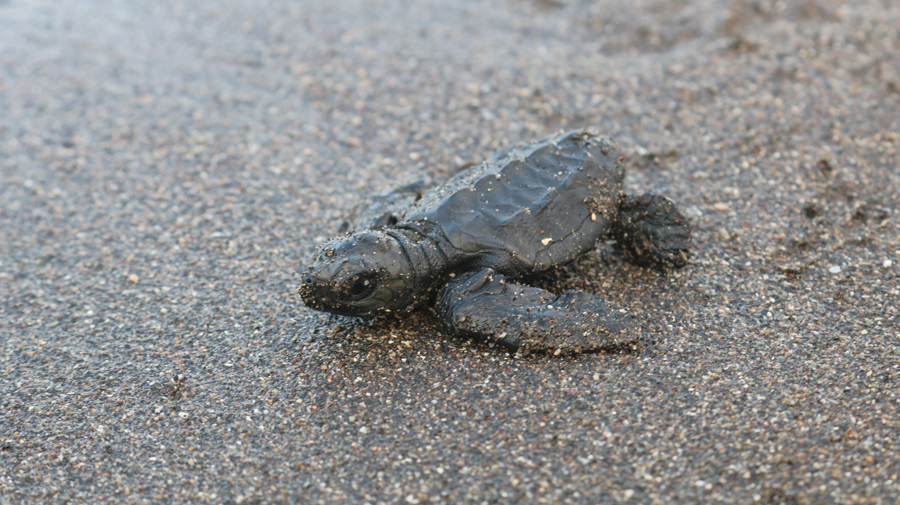 The 8th Pawikan Festival with the theme “PAWIKAN… BIYAYA NG KALIKASAN KAYA BANTAYAN, PANGALAGAAN, PAKAWALAN” was held at the Pawikan Conservation Area in Barangay Labac, Naic, Cavite on February 08, 2019. Activities of the long day festival included a boat race, a poster making contest and a traditional game of Palo Sebo. The annual celebration of the Pawikan Festival aims to increase awareness and to encourage stakeholders for protection and conservation of marine turtles. The last activity and the highlight of the Festival, which is the releasing of the hatchlings, were conducted at around 4:30 in the afternoon.

Ms. Judaline A. Fabro, Supervising Ecosystems Management Specialist of PENRO Cavite stated that through their information dissemination drive, the public were given information and awareness regarding the importance of the conservation of the turtles. This resulted in higher population of turtles in their area. They also have 15 beach patrollers that are being reoriented every year. They conduct patrolling at the onset of the Nesting Season.

According to a 2010 report of Oceana, “sea turtles play an important role in ocean ecosystems by maintaining healthy seagrass beds and coral reefs, providing key habitat for other marine life, helping to balance marine food webs and facilitating nutrient cycling from water to land.”[1] The importance of protecting and conserving the turtles were emphasized during the festival, as they are the “Ambassadors of the Seas”. They carry over many species on their carapace that benefit other marine species.  It also stated that the sea turtles are indicators of a good marine ecosystem.

According to Manuel Mandocdoc, one of the Bantay Dagat at San Juan, Batangas, they prohibited the residents to take sea turtle eggs in  a specific area in their shore that has the most number of reported eggs. Outside those active areas, residents can take the eggs because they use the profit in selling the sea turtle eggs to provide food for their family. Mandocdoc said that the residents living in the area sell the eggs for P12 each and that the buyers were usually from Sariaya, Quezon.

According to the patrollers in Batangas area, there are still more than 50% survival rate per season.

The DENR is urging the public to help and support the agency in its initiative to reduce waste that end up in Manila Bay and all other bodies of water, and report other ENR related cases. For citizens who would like to report or share their concerns, you may send an sms to +639456215007/ +639083340224, email to This email address is being protected from spambots. You need JavaScript enabled to view it. or send us photos, videos and other information via https://www.facebook.com/DENR4AOfficial/ #ZeroWaste #DENRCalabarzon #TayoAngKalikasan